Background and Motivation of Study

In New Zealand, stroke has become the third leading cause of death after cancer and heart disease, and it is the greatest cause of disability in older people [2]. Each year it is predicted that over 7,000 New Zealanders will experience a stroke event, and of this population at least three-quarters will die or be dependent on others for care one year after the event [3]. Health costs associated with stroke both to individuals and the health system is high and increasing. When severe, stroke has a substantial impact on the psychological and physical well-being of both patients and their families [4].

It is often observed that individuals with similar medical risk factors suffer a stroke at different time points to each other. It has been suggested that the external environment plays a significant role as a trigger of stroke. Moving toward personalized preventive measures, in this study we apply an individualized approach to stroke risk assessment using NeuCube SNN architecture in Figure 1. The first objective of this study is to verify that the increment of stroke risk in an individual with modifiable risk factors for stroke is triggered by a combination of environmental factors. Secondly, to understand the association of combined environmental variables toward a stroke event on individual level of risk. Thirdly, exploring the influence of prolonged exposure to inclement environmental conditions several days before a stroke event that can help us determine the earliest time point at which we can best predict the risk of stroke incident in individuals.

The dataset consists of 2805 samples (all with first-ever occurrence of stroke) taken from the Auckland Regional Community Stroke Study (ARCOS) population. This data set has been published in several studies where they apply different methods to the case study, for example statistical methods [6], FaLK-SVM (global method) [7], and a combination of evolving personalized method (evoPM) with gravitational search algorithm and recurrent reservoir [8]. In exploring the feasibility of NeuCube M1 (system) for predictive modelling of SSTD this study has been published recently in 2014 International Joint Conference on Neural Network (IJCNN) [9]. The third ARCOS study was chosen which is between 2002 and 2003, consisting of 1207 subjects. These subjects were then divided into several subgroups stratified by season (summer, autumn, winter, spring), history of hypertension, smoking status and age to explore the susceptibility of groups to the influence of environmental changes (see Table 1). Each subject is described by 12 environmental variables (wind speed, wind chills, temperature dry, temperature wet, temperature max, temperature min, humidity, atmospheric pressure, nitrogen dioxide, sulphur dioxide, ozone gas, solar radiation) measured daily within a time window before the stroke event, we created personalised models of 108 individuals using the NeuCube SNN architecture from Figure 1.

Since the data consists only of stroke subjects, the time window between days 60 and 40 before the event was used as ‘low risk’ and the days between 20 and 1 days before the event as high risk (see Figure 2).

A personalised SNN model can be used to reveal dynamic patterns of consecutive changes in the environmental variables over time that would represent meaningful, predictive triggering patterns for an individual (see Figure 3). Figure 3 suggests that consecutive changes of input variables, represented as trajectories of spiking activities of neurons in the SNN cube, would have an impact on a stroke risk. 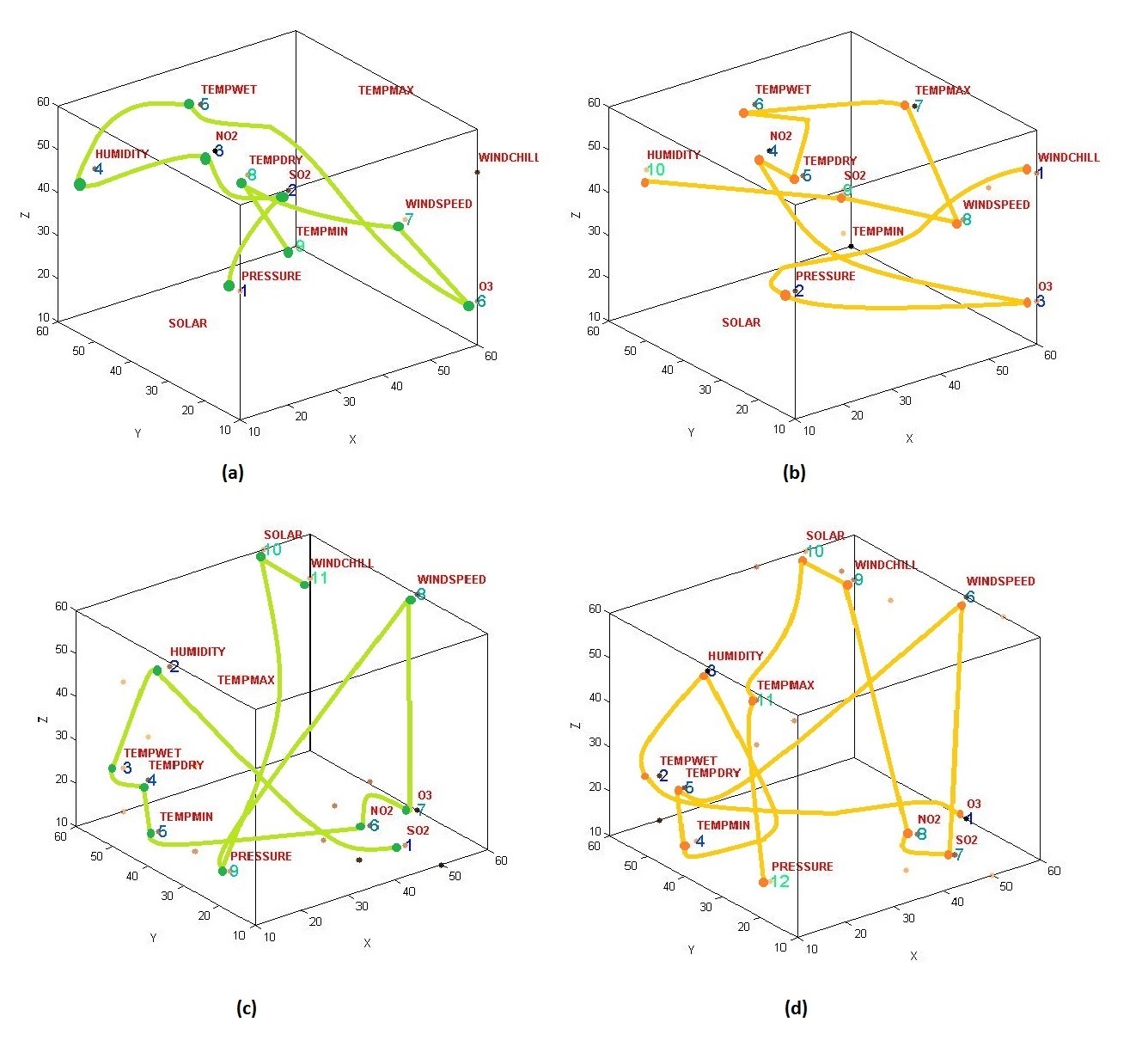 It could be argued that each season forms a different population grouping due to its different environmental conditions. To determine whether any differences were significant or not a two sample t-test with unequal variances was carried out. Using this t-test with all variant couplings of seasons, it was found that it is possible to group the seasons into two separate populations, see Table 2. As can be seen from Table 3, seasonal comparisons outside these groupings did show a statistically significant difference in population means, with an alpha value of 0.05.

When comparing the standard deviation of the environmental data within each season autumn showed the largest value at 4.19, see Table 4. This indicates that there is a greater level of variation within the data in this season than in any of the others, which may in turn affect the model built upon this data and its accuracy of prediction.

Table 2: Results of t-test for significant difference between seasonal groups. 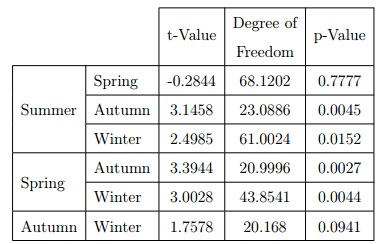 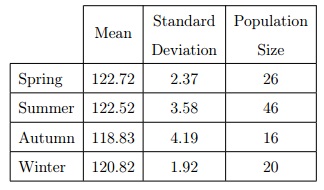 Table 4: Mean and standard deviation for environmental data within each season.

The novelty of this research is in proving there are hidden associations amongst the environmental features that increase the risk of stroke for an individual. This research has successfully achieved the objectives by predicting accurately the risk of stroke occurrences at the earliest time point at 6 days prior, and demonstrates that analysing all the features collectively can accurately predict stroke risk. We also confirmed that there is a cascading effect unique for each individual depending on their exposure to certain environmental factors within a specific time window.