Figure 1: Evolution of neurons’ activation degrees and the deep learning architecture formed in the SNNcube when the subject was watching a picture.

Figure 2: Evolution of neurons’ activation degrees and the deep learning architecture formed in the SNNcube when the subject was reading a sentence

Benchmark STAR/PLUS fMRI dataset is available at http://www.cs.cmu.edu/afs/cs.cmu.edu/project/theo-81/www/ [1], [2]. During fMRI data acquisition, subjects were shown a picture and a sentence, and instructed to press a button to indicate whether the sentence correctly described the picture. Particular intervals of this data which are related to reading sentences (affirmative or negative sentences) were analysed using benchmark LIBSVM https://www.csie.ntu.edu.tw/~cjlin/libsvm/ and the data classification results published in [3]. Similarly, I used this fMRI data for illustration of the NeuCube classification of fMRI data corresponding to different sentence polarities. The results are reported as follows:

The feasibility analysis of the NeuCube architecture is not only limited to a higher classification accuracy, but a better visualisation and interpretation of the SNN models trained on the fMRI data as shown in Fig. 1. NeuCube platform is available free at http://www.kedri.aut.ac.nz/neucube. 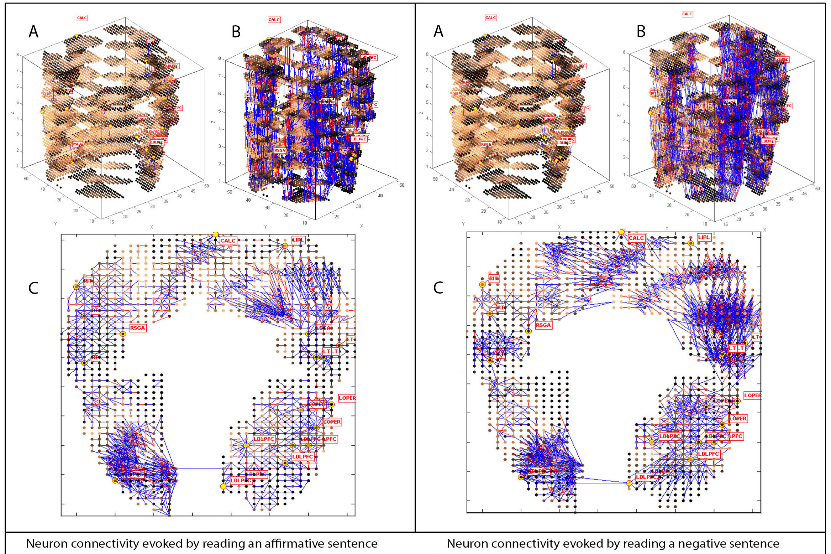 Fig 1. The initial (A) and final (B) connectivity of a SNNc after training with two different data sets, related correspondingly to: affirmative sentence versus negative sentence. The final connectivity is also shown as a 2D projection (C). Positive connections are shown in blue and negative – in red.